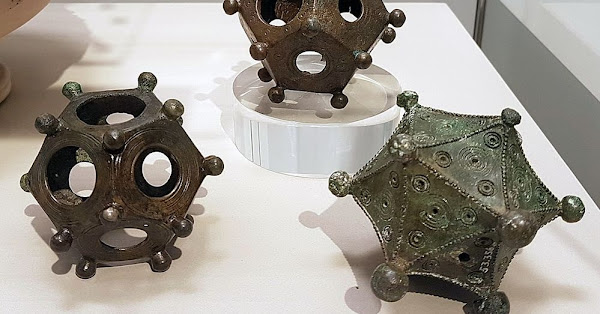 It is safe to say that there are some secrets of ancient Roman civilization that will not be revealed to us even with a lifetime of investigation. Yet historians and archaeologists continue their search, sometimes discovering artifacts that are astonishing and revealing at once. One such object is the Roman dodecahedron. The Hollow Object is a bronze puzzle consisting of twelve flat pentagonal faces with a decahedral shape. Its presence in Central Europe does not reveal anything about its purpose. But there are some hypotheses that have been floating around since its first discovery more than 300 years ago.

The first dodecahedron was discovered in 1739 by a local historian in the English countryside in Aston, Hertfordshire. In his report to the Society of Antiqueries, he described the object as “a piece of alloy, or ancient brass, with 12 equal sides”. The antiquarians were all right in this strange quest, but there was much more coming their way. Each object discovered later was different in size and build. Most dodecahedrons vary from four to 11 centimeters in size and between 35 and 580 grams in weight. Each pentagonal surface has a hole, but the sizes of these holes almost always vary – within a single dodecahedron as well as between different ones. Each of the five heads has a circular knob. Tinier than a tennis ball, the object looks like an interesting dice.

As of 2016, 116 fragments of dodecahedra were excavated in today’s Belgium, Croatia, France, Germany, Great-Britain, Hungary, Luxembourg, the Netherlands and Switzerland. The earliest discovery was made at Hadrian’s Wall in northern Britain. The southernmost was in Arles in France. Only one specimen made of silver was found in Geneva. Interestingly, as far as we know, no dodecahedron exists in the Eastern Roman Empire. Those found in the western region date back to the 2nd, 3rd and 4th centuries AD. The randomness of their locations as well as the lack of written reference have confused historians even more. 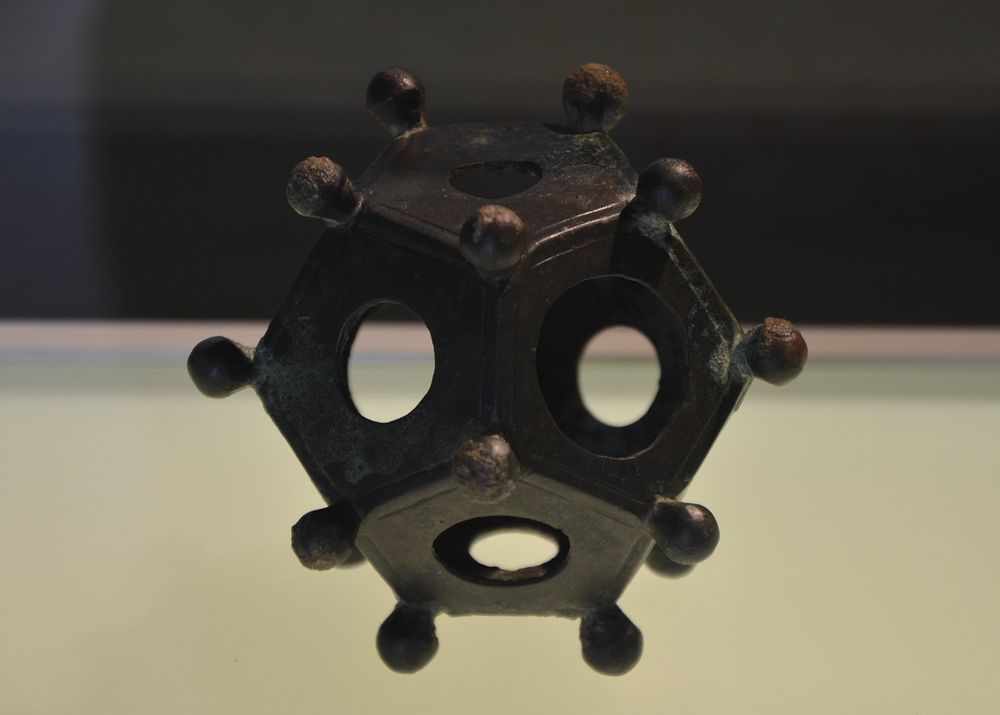 In 1987 a man named Brian Campbell discovered a dodecahedron in his yard. Others were excavated in Roman military camps, temples, and public bathhouses. Some turned out to be in theaters and tombs, some in piles of discarded coins. Many historians also found these items in antique shops, making it difficult to trace their origins. Most were adorned with designs and patterns, but never letters or numbers that could tell us their use. No mention of the object is found in Roman texts, and the soil excavated around the objects also refuses to reveal the truth. Only two dodecahedres have been found in controlled scientific excavations. One of these sites was probably a shop that sold precious metal items, confirming the possibility that the strange item was a precious one. 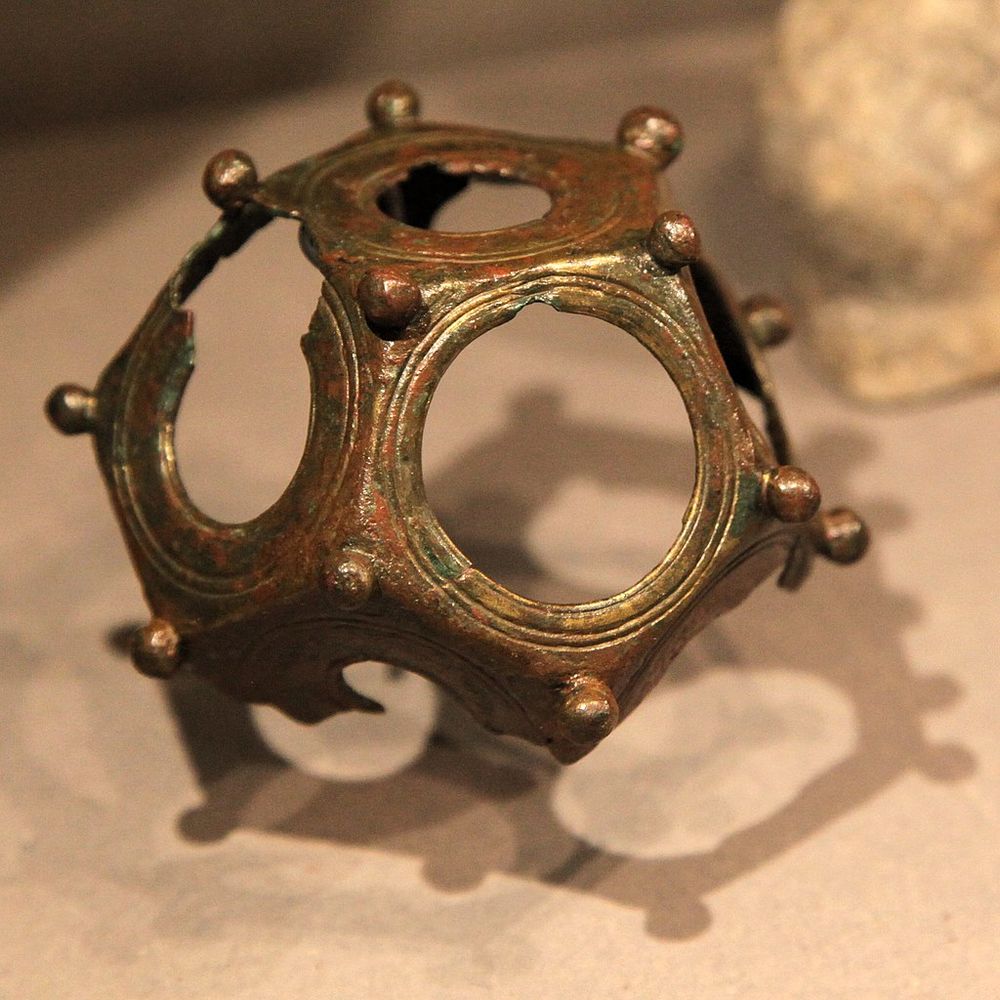 More than 200 historians have proposed more than 50 possible uses of the Roman dodecahedron. A dated belief is that the object was a weapon similar to a mace. More recently, historians are calling it a measuring instrument. The logic is explained by imagining a soldier looking at an object a few meters away through a dodecahedron. Suppose the length of the object fits the diameter of the peeping circle, what does this tell us about the distance to the object?

Dodecahedra mostly pops up in Gallo-Roman lands where Roman civilization superseded Celtic civilization. In that context, the 12 pentagonal sides may have temporal relevance. However, it would have been nearly impossible to tell yarn and astrologer with this instrument, as the knob would make it impossible to roll them and the walls would have no inscriptions to decipher as such. It is possible that they were used for astronomical calculations and that the Sun was shining through the holes at different times of the day. Dutch researcher Sjra Wagemans compared it to the icosahedron—a 20-facing convex polyhedron—which served a similar purpose. GMC Wagemans has proved through various conjectures that some dodecahedra can be used to determine the best time to sow winter grains in northern Europe.

Wax residues have been found clinging to various dodecahedra. Could this indicate their use as candlestick holders? Probably not, as the remnants may be the remains of their maker mold. In addition, a generic item such as a candlestick holder should be looked for in more general areas such as Italy. But our dodecahedra remains elusive in most areas of the ancient kingdom.

Other esoteric groups and lobbyists have suggested creative uses of the object, from crocheting to decoration. But neither of them holds more firmness in their arguments. Could this be a toy? It seems to fit into the popular French cup-and-ball game, the so-called bilboquet.

The final belief remains that the object was sacred and important to religious practice. The dodecahedron found in the Ideon Cave (Crete) was made of rock crystal, and on its twelve faces we find Greek characters instead of holes. Some have even said that the small hollow object was worn as a talisman or kept in a purse.

Despite the wealth of knowledge we have, modern men have found it difficult to ascertain what was the use and prominence of this 2,000-year-old artifact. Maybe, at some point, a deeper investigation and the imagination of free reign will reveal the secrets of this little ball that has become one of archaeology’s greatest mysteries.

, A Roman dodecahedron for measuring distance