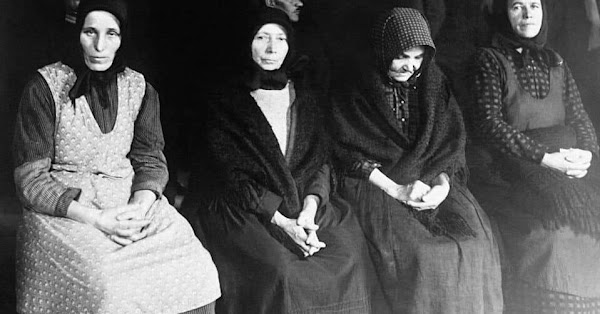 About sixty miles southeast of Budapest, on the Tisza River, is a quiet little village with a terrible past. It was here in Nagreve a century ago, women started killing their husbands en masse. They have been called “Angel Makers”.

It all started in 1911 with the arrival of a woman named Zuzsanna Fazekas. Fazekas introduced himself as a midwife. Some sources claim that she brought along her notes the recommendations of several doctors who praised her nursing duties. If Fazekas’ bleak past raised a few eyebrows (her husband apparently went missing under mysterious circumstances), no one said anything. Nagirev had no doctor at the time, and so Fazekas was readily accepted as his village midwife and “wise lady”.

Nagyrev’s Angel Makers during his trial in 1929. Photo by Keystone-FranceGamma-Rafo via Getty Images.

Fazekas treated the health problems of the villagers. Nagirev’s women liked him because he patiently listened to their intimate problems, including domestic ones, and gave advice. Fazekas soon gained a reputation for helping women get rid of unwanted children. Between 1911 and 1921, she reportedly performed ten illegal abortions.

In Hungarian society at the time, arranged marriages were common. Teenage girls were married to older men chosen for them by their families. Socially divorce was not allowed even if the husband was an alcoholic or an abuser. Many women, as happened in Nagirev, were left in loveless and sinister marriages with men they were often afraid of. So when World War I came and men were sent to fight, the women collectively heaved a sigh of relief. At the same time, an Allied prisoner of war camp was established outside the city. Prisoners of War were drawn to work in the fields in the absence of men. Along with their husbands, many women became romantically involved with young soldiers.

After the war, some of Nagirev’s men returned to the village and this made the women unhappy. They had become used to their sexual freedom and no longer wished to return to a life of subjugation. They turned to Fazekas for help.

Fajeka persuades the troubled women to get rid of their burdensome husbands. He took strips of flypaper and boiled them in a pot filled with water until the paper released its active ingredient, arsenic, which collected in a thin film on top of the water. Fazekas removed the toxic residue and bottled them in small vials. Fazekas instructed women not to add poison to their husbands’ food or coffee.

Soon the healthy males began to fall to the dead like flies.

As the years passed, more and more women came to Fazekas to serve him, and it was not only the unbearable husband who died. Parents, children and relatives were also victims. Some even poisoned each other. The figures for how many people died from arsenic poisoning in Nagirev vary wildly. It is claimed that the same thing happened in other villages in the area, and that 300 people may have died in total.

The murders went undetected for nearly two decades as Fazekas was the only doctor in the village. No one questioned when Fazekas said that it died of cholera and that it died of diarrhea. Fazekas’ associate, Susie Olah, filed a death certificate indicating natural causes of death.

The conspiracy came to light in 1929 when an anonymous letter to the editor of a small local newspaper accused women in the country’s Tiszazug region of poisoning family members. Authorities retrieved more than 50 bodies from the village graveyard; 46 of them contained arsenic.

34 women and one man have been arrested. In the end, eight were sentenced to death but only two were hanged. Another twelve received prison sentences. Fjekus committed suicide before he could be arrested.

In the nearby town of Tiszakert, arsenic was found in other exhumed bodies, but no one was convicted of their deaths. In the 1950s, historian Ferenc Gyorgyev met an old villager while in prison under the Communists. The farmer claimed that Nagyrev’s women had been “killing their men from time immemorial”.

The story of Nagyrev’s murders is a shameful part of Hungarian history. But the village pastor wants to open a shell and turn the sad history to his advantage. Arsenic Museum So that people can live with their past instead of hiding it. in 2004, BBC Nagirev went to open some old wounds. They met Maria Gunya, a young girl, when her father, a local official, was asked by the police to help them investigate crimes. When she grew up and moved out of her village, she denied where she did it out of shame.

Nagyrev came to prominence in 2005 when a documentary directed by young Dutch filmmaker Astrid Busink premiered at the International Documentary Film Festival in Amsterdam. The director spent four months talking to residents in the village, collecting facts and anecdotes.

“We were having a hard time talking to people. They shouldn’t be talking about it and they hadn’t talked about it for a long time, so we talked about it very carefully,” Bussink said. What surprised us was that older women were too easygoing about crimes; they didn’t talk about them like they were serious. Men were in the way.”

Bussink found that there was no single motive behind the killings. “There were many different situations: poverty, alcoholism, unemployment, World War I. Many men came home after being prisoners of war, some were crippled, unable to work.”

Mayor of Nagrave, Istvan Burqa, added: “The wounded soldiers came home due to a severe economic downturn. It was a difficult life. Conditions were extreme, and feeding the other mouth what nothing could contribute was too much of a burden on the family.”

“Women weren’t treated as well then – but that doesn’t justify what they did,” Bussink said,

However, for the time being, killing their husbands proved to be effective. The killings instilled fear in the minds of Nagreve’s men. And as Maria Gunya puts it, “after this the behavior of men towards their wives improved significantly.”