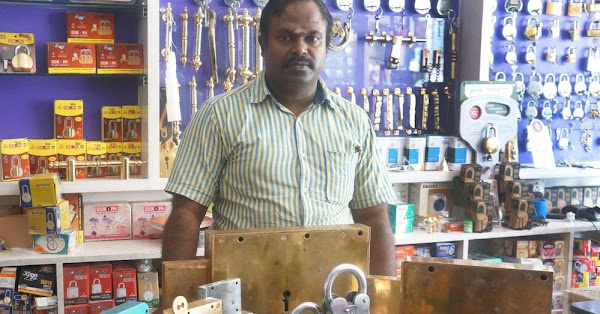 In Tamil Nadu, India, about 420 km south of Chennai sits Dindigul. In this city of more than two million people, families have slept without worry for centuries, while thieves have been known to hide in fear and desperation. It is the city that began manufacturing unique locks in the 18th century at the request of Tipu Sultan and has since earned a reputation as India’s most skilled locksmith.

lock back in time

The hardy locks of Dindigul got the Geographical Indication (GI) tag only in August 2019, but the indigenous craft has been around the block for hundreds of years. Like any historical tradition of a culturally rich society, the stories of lock making in Dindigul come in various shapes and sizes, forms and narratives. Many locals will tell you that the lock at the gate of the Rock Fort or Dindigul Malai Kottai was built in Dindigul. Historians and archaeologists differ, but if this is true, the craft dates back to around the 17th century when the fort was built by the Nayak kings. During the reign of Hyder Ali, the fort gained great strategic importance, and many say that it was his son Tipu Sultan who built the first hard lock at Dindigul. Local legends have been handed down over the generations, changing the origin story of this unique art from top to toe. What has remained unchanged though, is the careful finishing of the final products and their foolproof reinterpretation to suit the objectives in all areas.

Close your eyes and make a wish. Ask for the most complex lock to stop your enemies. Give it a simple name. By the time you open your eyes, the locksmiths of Dindigul have made your wish come true. The lock making industry here is full of mango locks, drawer locks, shutter locks, bell locks, trick locks, bullet locks and much more. The smallest locks made here were 3/4 inch in size, and went out of production by the 70s when the mass-produced locks of Aligarh took over the industry. Pradeep Kumar, a local locksmith from Dindigul, revealed, “When these small locks were sold for Rs 50, Aligarh locks were available for Rs 20, at that time China locks came for Rs 10.” news minutes,

Mango locks are named after the favorite summer fruit of India. Its mechanism, simply called the female key, has a circular hollow opening at its end that, when inserted into the padlock, latches onto a rod in the lock’s internal mechanism. The quirky mango locks went a step further and completed the power hierarchy of ancient families and businesses. The lock operates from three separate keys that can be distributed among members of different hierarchies in a social or business organization. For example, if the owner, manager and cashier of a store had the key to the safe, the owner could check the latter before reaching the safe. He could put the key in the lock, turn it once to the right then to the left, and the door would be closed and the other keys would not be able to open it. The manager could check the cashier by accessing the safe in the same way. Customers also order a Nithara Mango Lock, which has two holes, but can be opened with only one of them. If a key is inserted in the wrong hole, the lock is jammed. This helps to mislead the thieves. 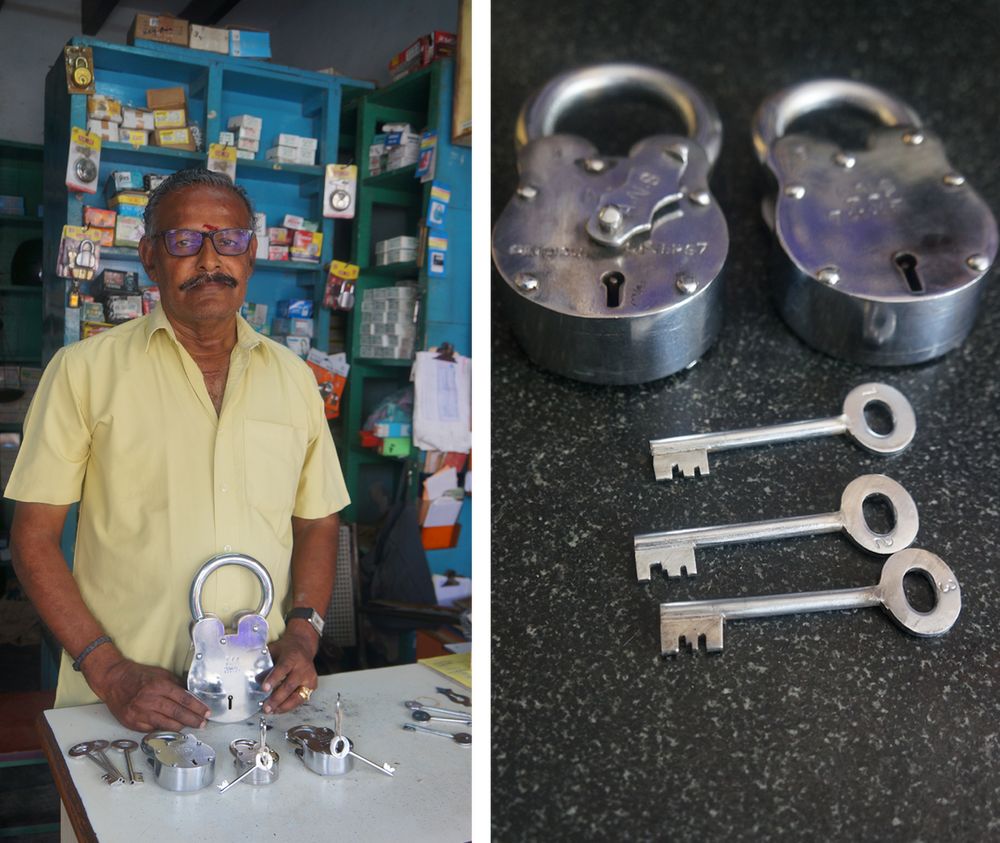 The diversity does not end here. Some locks have an iron rod that comes out of their key. To unlock, the key is held inside at a specific angle that is known only to the commissioner and locksmith. Some locks have a button that needs to be pushed before the key can be rotated, while others open with a pair of keys—one large and one small. The brass bullet lock weighs about 15kg, and you have to move the key through the different holes to open it. If today’s locksmiths are to be believed, the 1980’s Kolaigaran Puttu used to remove the wrong key in the knife.

For a state that was on the verge of iron reserves and starved for water, locksmithing became the most natural means of sustenance. There were hundreds of workshops in and around Dindigul, and in every corner there were handmade masterpieces by local artisans. But today only 50-60 craftsmen are carrying the burden of heritage on their shoulders. Before GI tagging, the art was dying a quick death as youth faded away from its heritage and mass production was providing new levels of ease to once-loyal customers. While the demand for hardy, failsafe locks remains intact, the manpower for production has suffered a steady decline. The second competitive lock industry is in Aligarh. There too, machine-made locks are able to meet the needs of the market rapidly and inexpensively. Where once the locks of Dindigul were a prized secret recipe of commerce, today the city’s craftsmen are eager to teach it to anyone willing to keep the art alive. The variety of designs diminishes as the craftsman with the skill progresses. Where once a hundred types of locks were made in Dindigul shops, today only around 10 to 50 are made.

But an impressive product is not easily forgotten. These old fashioned locks were futuristic in their design and unreliable in their mechanism. The locksmith understood this and gave only one key to each commissioner so that the thieves had no way to break the lock. K.K. of Nallampatti village. “Even now people come to get duplicate keys of 200-year-old locks,” Muthuveeran had said. HinduRevealing that those who had once experienced the security of Dindigul locks never went back to the usual means of security.

, The Times of India