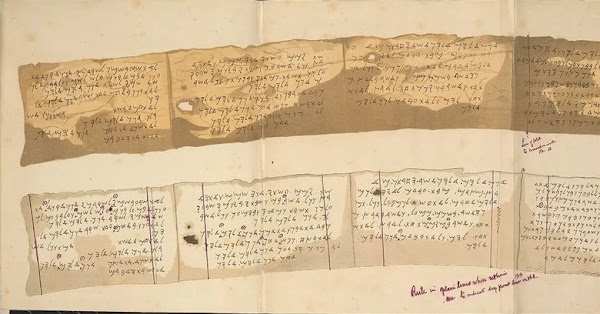 In 1883, a Jerusalem antiquities dealer named Moses Wilhelm Shapira announced the discovery of a remarkable artifact—15 fragments of ancient leather-bound manuscripts that he claimed were found near the Dead Sea. The manuscript contained biblical verses from the Book of Deuteronomy, but was slightly different from those used in churches and synagogues. Shapira explained that separate text and Paleo-Hebrew inscriptions have suggested that the manuscripts were older than the Book of Deuteronomy, dating from the First Temple period, before the Babylonian exile. If true, this would make the scroll the oldest biblical manuscript in the world.

A fragment of a copy of the Shapira Scroll, prepared in consultation with the British scholar Christian David Ginsburg, in 1883.

Shapira’s claim aroused great public interest and made headlines in newspapers around the world. But experts were skeptical of Shapira’s bold claim. Shapira had a reputation for selling counterfeit artifacts. A few years ago, he was caught trying to sell a counterfeit “Samson’s coffin”, which had the epitaph misspelling the name Samson. In another lucrative deal, he sold 1700 fake sculptures, the so-called ‘Moab lattice’, to a museum in Berlin. With the money earned through this fraudulent transaction, Shapira bought a beautiful villa outside Jerusalem’s old city walls.

Shapira tried to substantiate his discovery by sending copies to various archaeologists and scholars in Germany. But his decision was unanimous—the manuscripts were forgery. The Royal Library of Berlin also offered to purchase the scroll from Schapira so that German students could study the technique of the forger. Shapira refused and, instead, offered the treasure to the British Museum for one million pounds. The museum put two pieces on display, attracting hordes of visitors, including Prime Minister William Gladstone. The rest were sent to prominent biblical scholar Christian David Ginsburg for evaluation. Four weeks later, Ginsberg came up with a verdict: The manuscript was fake. Ginsburg said that Shapira had actually taken the old Torah scroll, cut off its empty lower margin, and inscribed that ancient-looking strip with his own version of the deuteronomy. Ginsburg also indicated that the size of the strips, their rule, and the leather used matched the Yemenite scrolls Shapira had previously sold to the museum, suggesting that the Shapira scrolls were probably cut from Yemenite scrolls. 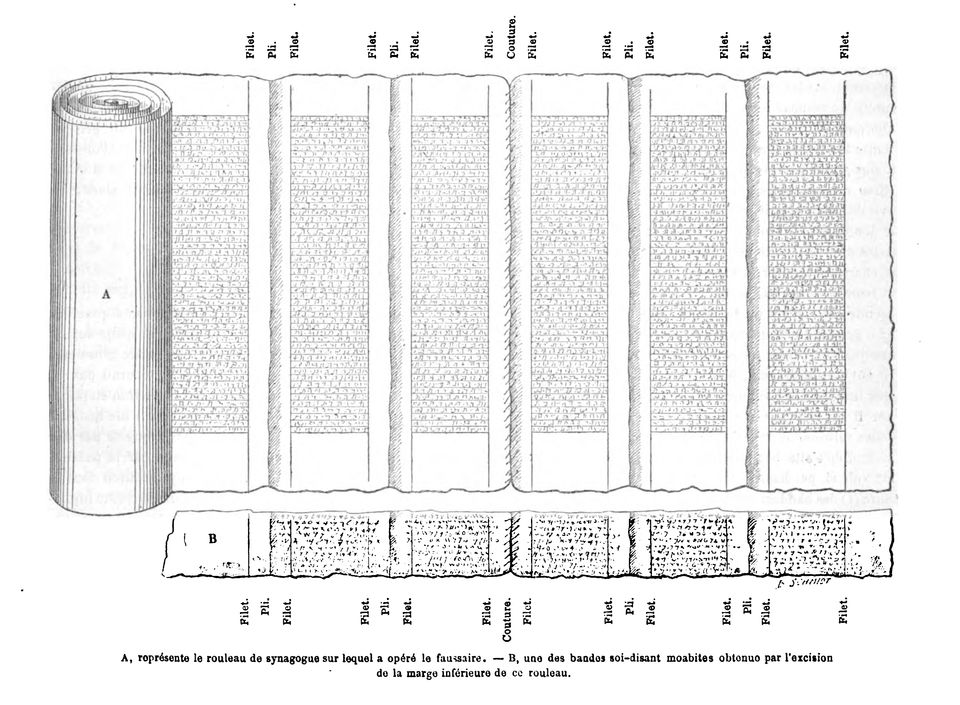 Shapira’s stripes as compared to a synagogue scroll margin. An illustration by Clermont-Gneau

Ginsberg’s conclusion plunged Shapira into despair, and he fled to London. On August 23, 1883, he wrote to Ginsburg:

You have fooled me by publishing and displaying things that you believe to be false. I don’t think I can escape this shame. Although I am not yet convinced that the manuscript is a forgery – until Monsieur Geneau did. I will leave for Berlin from London in a day or two.

Despite writing to Ginsberg that he would leave for Berlin, he fled London to Amsterdam, leaving the manuscript behind, and from Amsterdam he wrote a letter to Edward Augustus Bond, the head librarian of the British Museum, begging the manuscript to be reconsidered. Was. , In both letters, Shapira reaffirmed her belief in the scroll’s authenticity. Six months later, he shot himself in a hotel room in Rotterdam.

A few years later, the Shapira scroll appeared at a Sotheby’s auction, where it sold for £10. The scrolls were last seen at a public lecture in Burton-on-Trent in 1889, after which they disappeared forever.

Shapira’s scrolls were forgotten until about 60 years later when the Dead Sea Scrolls were discovered in the Qumran Caves on the shores of the Dead Sea, in the exact same circumstance that Shapira claimed to have found his manuscripts, thus Shapira A new interest was ignited in K’s scrolls. , Could those manuscripts be genuine? 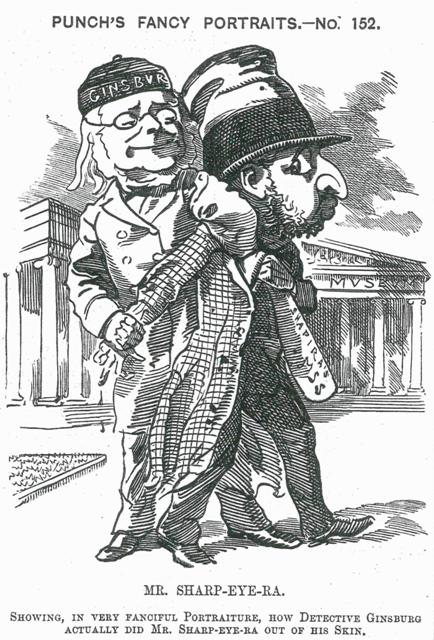 This cartoon appeared in “Punch” after Ginsberg’s decision.

Idan Dershowitz, a 38-year-old Israeli-American scholar at the University of Potsdam in Germany, believes the manuscript was an authentic ancient artifact—the ancestor of the Book of Deuteronomy.

Dershowitz thinks that dismissing Shapira’s manuscript some 140 years ago was not merely a mistake, but “a tragedy”—and not just for Shapira.

He said, “It is astonishing that for almost the entire existence of the discipline of biblical study, the text that tells us more than any other manuscript discovered earlier or later has not been part of the conversation.”

Many modern scholars still believe that the scrolls were forged. In “The Lost Book of Moses”, a 2016 book about the Shapira case, journalist Chanan Tige claimed to have found the original leatherette, from which Shapira had cut the bottom, as seen in Ginsburg and later Claremont. -Ganeau had guessed. But according to Dershowitz, the Torah scrolls were cut to prevent rot after water damage, not to provide material for forgery.

Dershowitz also traveled to the Berlin State Library to see Shapira’s papers. There, scattered over a limited amount of mangled invoices and notes, she found something she said no one had ever noted: three handwritten sheets that show Shapira trying to decipher the pieces, including There are many question marks, marginal views, cross-out readings. and transcription errors.

“It’s amazing because it gives you a window into Shapira’s mind,” Dershowitz said. “If he forged them, or was part of a conspiracy, it makes no sense that he would have been sitting there trying to guess what the text was, and making mistakes while doing so.”

Dershowitz received encouragement from many scholars when he presented his findings at a confidential symposium at Harvard Law School.

Michael Langlois, an epigrapher at the University of Strasbourg who attended the symposium, credited Dershowitz with making the best case, even though it, in his view, relied on several hypotheses. But he noted that when the first Dead Sea Scrolls appeared in 1947, some prominent scholars, noting Shapira’s failure, initially dismissed them as fake.

“Can you imagine what would have happened if no one had the courage to accept them as authentic?” Langlois said. “We don’t even have Dead Sea scrolls today.”

Sidney White Crawford, an epigrapher and Dead Sea Scrolls expert at the University of Nebraska-Lincoln, said that without original passages Dershowitz’s arguments cannot be proved or disproved, so they “should remain a footnote in scholarly discussion of the origins of Deuteronomy.”

“Shapira’s story retreats through a tantalizing whirlpool of do-it-yourselfers,” writes Jennifer Schuesler the new York Times, “What if someone with less checkered reputation found the pieces? What if Shapira hadn’t committed suicide? What if they weren’t lost—or were first revealed 80 years later, after the Dead Sea Scrolls) , when would scholars have viewed them differently? And of course, what if they were indeed forgers?”