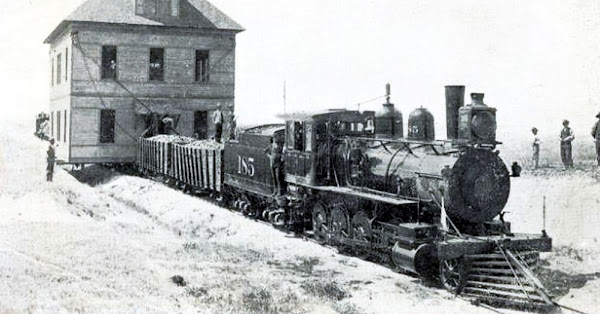 Perhaps the strangest thing that had to be moved by rail was a house—more precisely, the courthouse in Hemingford, which was at the time the county seat of Box Butte County, Nebraska. Courthouse was transferred to the Alliance which seized the county seat position from Hemingford.

In 1890, another election was held to decide the new county seat of Box Butte County. The two contenders were Alliance and Hemingford. Through some questionable voting and with the support of the Lincoln Land Company, which wanted to promote the development of the community, Hemingford managed to secure the seat and a new courthouse was built there. Nine years later, the issue was still unresolved and the residents of the Alliance did everything in their power to hold another election. This time the Alliance won, and county commissioners were confused as to what to do with the courthouse.

Because the courthouse at Hemingford was less than 10 years old and still had structural value, it was decided that the existing courthouse would be moved 20 miles to the southeast to be relocated to the Alliance. The first attempt to move it was made by two teams of horses pulling the structure which was placed on large rollers. The horses would pull it a couple feet and then the rear rollers had to be moved forward again. After ten days, the house had moved only 15 feet, and the method was abandoned as being too slow and impractical.

Burlington’s Wyoming Division Superintendent JR Phelan proposed relocating the building on the railroad. Accordingly, the 45 ft by 54 ft by 40 ft high structure, weighing 95 tons, was mounted and secured on nine pairs of railroad cars. With a train crew of 75, which facilitated the progress of the train by widening the cuts when necessary, the train accelerated at 10 mph. The whole move took only 6 hours.

The move attracted considerable attention, and the event was publicized with commemorative plates and silver spoons with drawings and the date of the move, July 3, 1899.