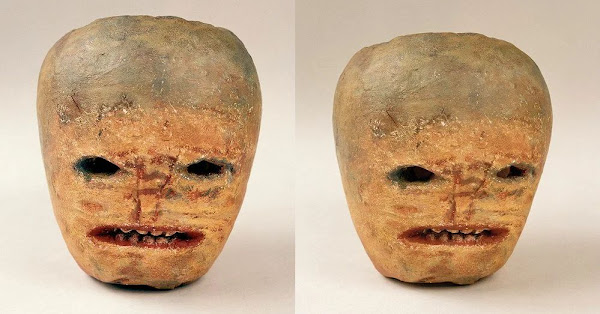 The annual Halloween tradition of carving pumpkins into jack-o’-lanterns was originally an Irish ritual, but instead of pumpkins, people across the pond took their knives to the root of turnip-like vegetables. The friendly smile we see today on the carved pumpkin looked far more sinister than the long face of the turnip. A terrific example is on display at The Museum of Country Life in Castlebar, Co Mayo. “People back off when they see it in the flesh,” says keeper Tony Candon, the museum’s manager. Irish Times, “There’s a fascination with it — it sends a shiver down the spine. It’s small enough but it’s very powerful.”

The custom of carving vegetables during Halloween began among the Samhain in Ireland. In these Gaelic-speaking regions, Halloween was seen as a time when supernatural beings and the spirits of the dead walked the earth. Lanterns were carved and placed on the windowsill to keep harmful spirits out of the house. One particularly unlucky entity was Stingy Jack.

According to folklore, many centuries ago in Ireland, there lived a drunkard named “Stingy Jack”, who was known throughout the country as a clever manipulator. One night, Satan overhears the story of Jack’s evil deeds and decides to test him himself to find out whether Jack has lived up to his lowly reputation. So Satan approached Stingy Jack and told him that he had come to collect his soul. Jack requests that he be allowed to have one last drink. They both went to a local pub and Jack drank to his heart’s content. Later, Jack asks Satan to pay the tab for the alcohol. When Satan replies that he has no money, Jack convinces him to convert himself into a silver coin to pay the bartender and turn back when he is not looking. As Satan turned into a coin, Jack put the coin in his pocket, which also contained a cross. The presence of the cross prevented Satan from escaping from his form. Jack agrees to release Satan on the condition that he will not trouble Jack for ten years.

Ten years later, Jack meets Satan again, and again Satan announces that he has come to take him to Hell. Jack asked if he could have an apple, and Satan foolishly agreed to his request once again. As Satan climbed a nearby apple tree to fetch a fruit, Jack made a cross on the trunk of the tree. Satan, realizing that he is trapped again, makes another deal with Jack, this time promising never to take his soul to hell.

When Jack eventually died, he was denied entry into Heaven because of his deceitful life and Satan would not have him because he had given Jack his word. Instead Jack was left to roam the earth forever, a burning coal inside a carved turnip to light his way. He became known as “Jack of the Lantern” or Jack O’Lantern.

When Irish immigrants came to North America, they brought with them their own tradition of root vegetable carving. Instead of turnips, he started carving pumpkins because of their availability. Pumpkins were also very large making them easier to carve than turnips. Long ago, carved pumpkins became a symbol of Halloween.