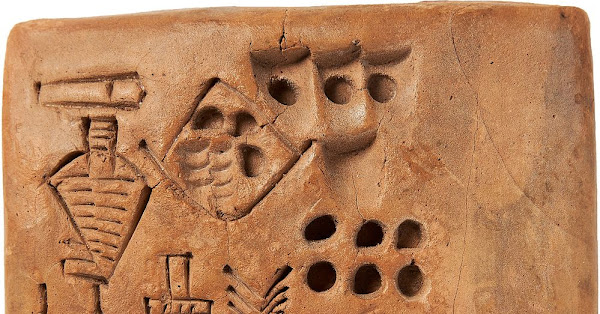 Humans have been calling each other by names, probably hundreds of thousands of years since the first humans evolved homo heidelbergensis and moved out of Africa. We do not know what these early names sounded like because there was no method of recording the sounds. Writing may not have been invented until very late in human history, about 5,500 years ago, in ancient Mesopotamia. The Sumerians were the first to develop a script to record information. Known as cuneiform, it used a combination of pictures and symbols to record facts and figures such as business transactions.

For example, this 3-inch by 3-inch clay tablet, recovered from the ancient Sumerian city of Uruk, and dating back 3,100 years, details barley’s transactions with these hieroglyphs:

Down in the middle of the tablet is a pile of barley. To its left is a brick building with a fireplace, probably a brewery. To its left is once again a cauldron inside a vessel, indicating that barley is to be turned into beer. The quantity included is marked on the top of the picture. Included on the left is the time period, marked by 3 circular holes and seven small pits. Taken together, the record probably reads: “29,086 measures of barley were obtained in 37 months”.

At the top left, above the pot with the barley sheaf, are two symbols whose representative sounds are known—but they do not mean—when taken together. They form the word “Ku-SIM”. Based on his position at the end of the sentence, it has been suggested that Kushim is a name—the name of the person or accountant who received the barley. If so, then Kushim may be the first name we know from history.

However, kushim could also have been the general title of an officeholder or profession, rather than the name of the individual. The cuneiform characters “ku” and “Šim” were not presented with much context, and so it is difficult to determine whether such sign combinations represent a person, an individual’s office, or even a whole. Represent the institution. The name of Kushim appears on 18 different tablets of this period. He was probably responsible for the production and storage of barley. Some tablets charge the distribution of barley to several authorities in the form of various debits, with the sum on the reverse as a single credit for the discharge of the obligation of Kushim. A relatively simple account shows the three officers being charged different quantities of barley, while Kushim was credited for the total amount distributed to the officers on the reverse. However, the opposite can also be interpreted as Kushim’s account. Other tablets are more complex, showing the inputs of different ingredients on the front (malt, hops, etc.), while showing different types of beer as outputs on the reverse side. A bullet shows Kushim giving 14,712 liters of barley to four officers, for which he was properly discharged.

Another contender for the oldest name is a tablet dating from the same period as the Qushim tablet, found in the ancient city of Shurrupak, in what is now modern-day Jemdet Nasr in Iraq. Although this tablet is believed to be a generation or two smaller than the Kushim tablet, the handwriting is not clear here.

The tablet begins “Two slaves held by Gal-Saal” And then comes their names: “N-Pap X and Sukkalgir”.

So the oldest names in the world that we know of are not of some great conqueror or prophet, but of ordinary citizens—an accountant, a slave owner, and some slaves.

The earliest known name of a person holding a position of power is from Egypt in the 32nd century BC, making him a contemporary of Kushim and Gal Sal. His name was Eri-hor and he was the king of Upper Egypt in the pre-dynastic period. Eri-Hor probably ruled Abydos and the wider Thanite region from Hierakonpolis and controlled Egypt at least as far north as Memphis. Some Egyptologists believe that Eri-Hor also controlled parts of the Nile Delta.

When the name Eri-Hor was first discovered, some Egyptologists did not believe that Eri-Hor was a king, as he had never appeared in one. serekha, the façade that always encloses the names of the Egyptian royals. However, with the discovery of Iri-Hor’s tomb in the cemetery of Abydos and a number of pottery and pottery items near it, along with his name, the existence of Eri-Hor was proven. The final evidence came in 2012 with the discovery of an inscription at the Sinai, showing a portrait of him on a boat next to the word. inbu-hedgejo Meaning “white walls”, the ancient name of Memphis.

Eri-Hor is now believed to be the oldest king of Egypt we know of before the dynastic pharaoh.