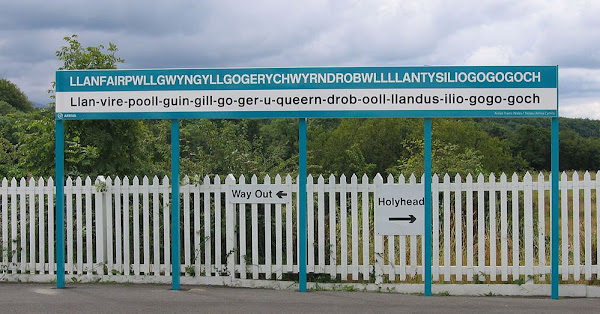 On the island of Anglesey on the north-west coast of Wales, across the Menai Strait, there is a small village with a big name: Llanfairpwllgwyngyllgogerychwyrndrobwllllantysiliogogogoch either llanfairpwll In short.

The original name of the city was pwlguingil, which is still untraceable, but at least it was small. It was one of two townships that made up the parish, the other being Trephorian. In the middle of the 16th century, the name of the town was recorded as Llanfair y pwlgwingyl, which meant “St. Mary’s Church of the Pwlgvingil”. The township name was suffixed with the name of the church to distinguish the parish from the many other sites dedicated to Mary in Wales.

In English, the name translates to “Saint”. St. Mary’s Church in White Hazel’s Hollow near the rapid whirlpool and St. Tysilio’s Church near the Red Cave. “The name is very specific. It refers to the whirlpool in the Menai Strait known as the Svelies and refers to the small chapel of St. Tisilio located on a nearby island. The final “Red Cave” is believed to be an addition inspired by the Cardiganshire parish of Landislioggo, rather than any local features.

The name itself attracts about 200,000 visitors per year. The most popular attraction is the Lallanfairpalle railway station which has a plate with the full name of the village.