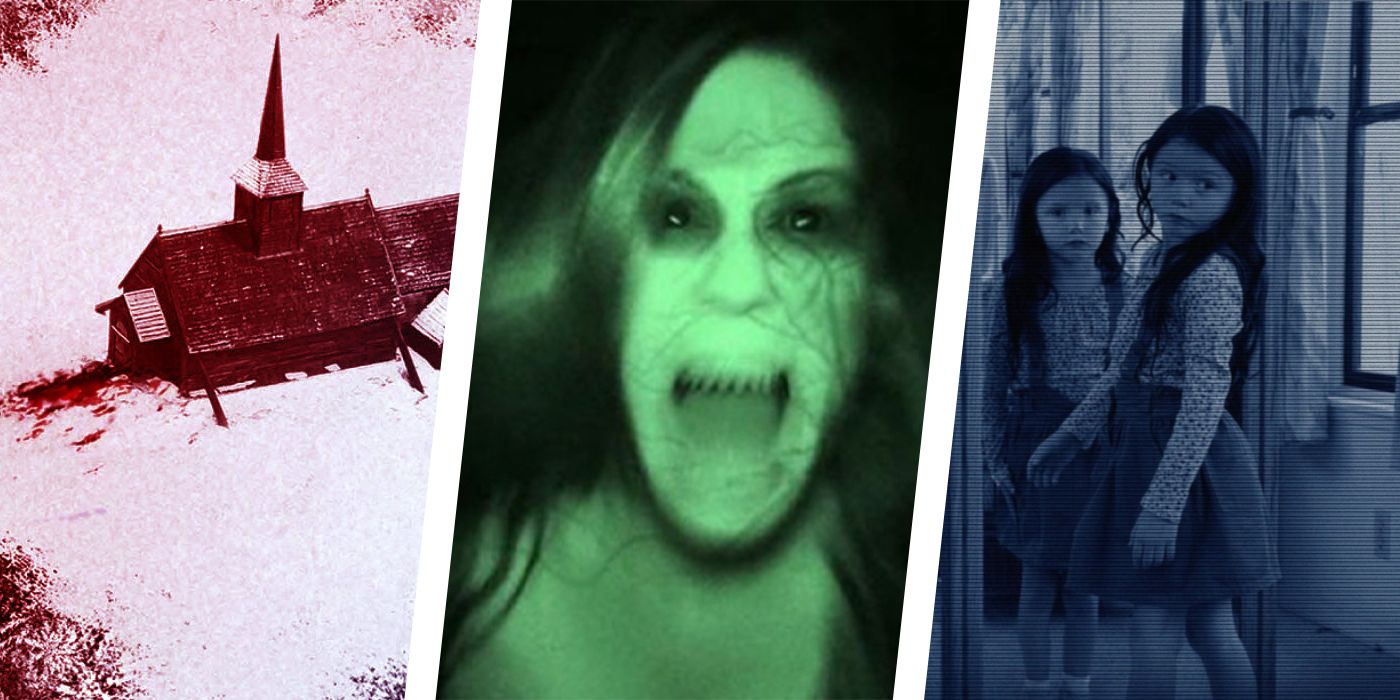 When Paranormal Activity hit theaters in 2009 (after its festival screenings in 2007), it forever changed the found-footage subgenre and helped spawn a new fundamental franchise in horror. With the October 29, 2021 release of Paranormal Activity: Next of Kin, the movie series is back in the spotlight, once again frightening audiences with its signature mix of supernatural events told through a low-key aesthetic.

The original found-footage premise of Paranormal Activity was genius in its simplicity: taking the approach of amateur-looking — rather than glossy professional — film, the basic story was told through home movies and security footage. Not only did the format make the movie incredibly cheap to produce, but it significantly impacted the movie’s overall tone, creating a feeling of intimacy that made the supernatural events — conveyed through very tasteful and believable special effects and acting — all the more convincing and menacing. Later films maintained this approach while extending on the main movie’s lore. As budgets increased, the effects became more spectacular, and by the sixth movie in the franchise, 2015’s Paranormal Activity: The Ghost Dimension, concepts like cults, other dimensions, and time travel were introduced into the overall mythology of the iconic Paranormal Activity demon entity, “Toby.”

After a 6-year hiatus following the poor reception of The Ghost Dimension, the franchise returned with the soft reboot Next of Kin. Although critical reviews and audience reception have continued to decline over the last few entries in the franchise, there are plans for an eighth Paranormal Activity movie, titled The Other Side. What’s more, the story in Paranormal Activity: The Other Side will return to Katie Featherston’s story with Toby, while the shocking ending of Next of Kin keeps the door open for a parallel storyline for further entries in the found-footage series. Here are the existing Paranormal Activity movies ranked, from worst to best.

7. Paranormal Activity: Next of Kin

It was an admittedly bold choice to soft reboot the Paranormal Activity franchise with Next of Kin. Rather than continuing the story of Toby’s history with Katie’s family, Next of Kin introduces a whole new female protagonist, Margot, as well as a new demon: Asmodeus, who is based on a real-life figure in Abrahamic dogma. The new antagonist takes some cues from the version in religious texts, including a neat reference to Sarah, who Asmodeus fell in love with in the Book of Tobit. Next of Kin is also notable for shifting away from the pure found-footage format of incidental recordings (security cameras, laptop cameras, etc.) to a small crew of documentary filmmakers who happen to catch supernatural events while making their movie about Margot meeting her biological family in an Amish community.

Despite all of the changes introduced by Next of Kin, it fails to feel fresh or even original. The frights are few and far between, and the attempt to elicit chills from the “strangeness” of the Amish community is ineffective. Oddly, Next of Kin feels more like the Blair Witch franchise than a Paranormal Activity movie, thanks in part to the similar premise and fascination with the occult. Overall, the movie’s reviews are weak. The climax is underwhelming, and although the ending sets up an epic struggle for a future film, it’s hard to believe that this story will be continued past this entry.

While one could easily argue that the Paranormal Activity films hit a level of diminishing returns with the whole found-footage conceit, abandoning that altogether did not fix the franchise. It almost feels blasphemous that Paranormal Activity: The Ghost Dimension adopts a more traditional look. That’s not to say that a conventional Paranormal Activity film can’t work — with the right director and a strong story, it could be a welcome change to the series. The problem is that Ghost Dimension fails to bring anything new to the franchise, and is bogged down by its own storytelling as attempts to connect the many disparate storylines from the previous films. It’s commendable that the movie adopts the time-hopping dimensional gates that The Marked Ones introduced in a way that can actually connect the chronology of all of the films in the series, but the overall execution of that plot doesn’t really work.

It’s validating to get the return of “Toby” in a very big way and more answers on Katie, Kristi, and the coven that’s been obsessed with them, but Ghost Dimension is a convoluted, disappointing whimper of a finale for the overall Paranormal Activity story. Thankfully, it’s been confirmed that the upcoming Paranormal Activity film will return to its found-footage roots and once again continue the core story. Next of Kin was not a scary entry in the franchise, so hopefully, a return of Toby in The Other Side will improve upon both Next of Kin and The Ghost Dimension.

Paranormal Activity 4 is forced to give some answers, which is both helpful and harmful to the franchise. It’s less convoluted than The Ghost Dimension but suffers from many of the same issues in terms of story problems. The film examines the continued damage that a possessed Katie wreaks, with this time her neighbors getting caught in her orbit. Perhaps the most interesting thing about Paranormal Activity 4 is that it has a considerably younger perspective. Previous entries in the series feature children, but this is the first one that has two teenagers as the protagonists since the parents are largely out of the picture.

It’s an inventive shift, but not one that works for everyone. Henry Joost and Ariel Schulman return to direct their second Paranormal Activity film and they bring a lot of new ideas to the series. This is a bit of a necessity four films in, but the use of laptop webcams and Kinect motion-tracking technology are worthwhile additions, leading to some of the movie’s spookiest scenes. It’s by no mean the worst movie in the main Paranormal Activity franchise timeline but is definitely one of the weakest.

4. Paranormal Activity: The Marked Ones

After the events of Paranormal Activity 4, the audience’s interest in the series was dwindling and there was a need to shake up the formula. Initially billed as the first (official) Paranormal Activity spin-off, The Marked Ones tells a familiar story of paranormal events and possessed individuals but shifts the horror to a Latino community. This new focus is deeply refreshing and it’s impressive to see how much of the film is actually presented in Spanish with subtitles without any aspirations to try to be more “mainstream.” The Marked Ones’ biggest strength is that it has lovable characters who actually do smart things, but just get caught up in an impossible situation. The movie expands on the witches and “marking” aspects of the previous films and it surprisingly fills in some blank’s regarding the original film’s ending (in one of the franchise’s most unexpected twists). There’s a lot of passion and creativity present in Paranormal Activity: The Marked Ones, and while it helped revive some interest in the series for a time, it still suffers from how four films before it have already tapped this topic.

Paranormal Activity 2 faced the difficult challenge of following what was a landmark, groundbreaking film with a mostly complete story. The Paranormal Activity sequel would both have to somehow continue the events of the first film and recapture the magic that made the original so remarkable — all while telling its own, fresh, story. Opting to continue the main story rather than taking a more anthological approach, the most clever and successful thing about Paranormal Activity 2 is how it initially appears to just be another random haunting, only for the movie to eventually reveal that not only is Kristi the sister of Katie from the first film, but that this movie largely takes place slightly before the events of the first film.

The reveal at the end of Paranormal Activity 2 is undeniably a clever twist that hints at the bigger picture of this story, setting in motion the whole storyline with Hunter. It also retroactively fills in the narrative gaps for the first film, enriching the franchise’s lore up to that point. While these chronological tricks are entertaining, the film falls a little short in the scares department. It follows so many of the same beats as the original that the supernatural events — while still creepy — just don’t have the impact as they do in the original. Still, it’s a worthy successor in many ways and an enjoyable entry in the franchise.

Oren Peli’s original film that started it all back in 2007, the first Paranormal Activity took what made The Blair Witch Project so frightening, but amplified the horror in a truly visceral way. Rather than making the setting frightening, Peli brings the threat into the home in a relatable — and truly terrifying — fashion. Micah and Katie are victims of a supernatural presence that neither they, nor the audience, can really understand, and as the tragic events unfold throughout the movie, the viewer is there, sharing the moment, every step of the way.

Much like Blair Witch, the film accomplishes a level of extreme realism through its presentation. The ultra-low-budget film is a testament to how less can be more: the advent of the surveillance camera aesthetic immerses the audience in the plot and setting, creating a sense of intimacy and authenticity. Even something as simple as Katie’s sleepwalking takes on a menacing tone, making the major moments of “paranormal activity” truly shocking when they occur. It’s easy to see how this film was able to make a heavy impression on people — and inspire a lengthy list of sequels. While some of the series’ entries have improved upon the formula, the original movie masters this storytelling style right from the start.

While audiences were set up for a continuation of the story after Paranormal Activity 2’s ending, the franchise cleverly turns the clock back for Paranormal Activity 3. The third movie in the series looks at a young Katie and Kristi in order to chronicle the alleged origin point of all of this paranormal activity. The results are fantastic and newcomers to the series, Henry Joost and Ariel Schulman, find exciting ways to reinvigorate the found-footage format. It’s no surprise that they are the only directors from the series that stuck around to helm more than one installment. The struggle that Katie and Kristi experience is genuinely heartbreaking and it alters the events of the first two films in satisfying ways. The final act of the film features some of the best scares from the entire franchise and is a testament to how powerful this concept can be.

Daniel Kurland is a freelance writer, comedian, and critic, who lives in the cultural mosaic that is Brooklyn, New York. Daniel’s work can be read on ScreenRant, Splitsider, Bloody Disgusting, Den of Geek, and across the Internet. He recently completed work on a noir anthology graphic novel titled, “Sylvia Plath’s The Bell Noir: A Rag of Bizarre Noir and Hard Boiled Tales” and he’s currently toiling away on his first novel.

Daniel knows that “Psycho II” is better than the original, that the finale of “How I Met Your Mother” doesn’t deserve the hate that it receives, and that Garth Ennis’ run of “Animal Man” may be the best superhero story of all time. He’s a fan of white grape juice and appreciates a good Fuji apple.

The owls are not what they seem.