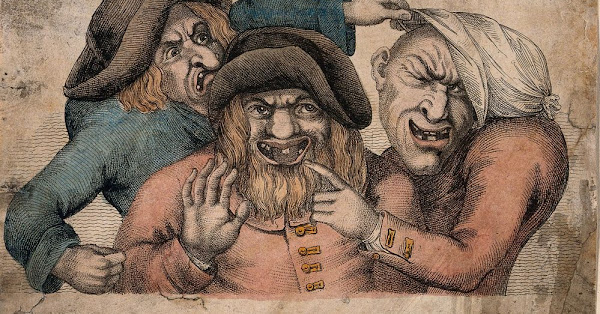 In the 1880s, you could be fined for being unattractive in public. Ordinances across the United States did not allow anyone “ill, crippled, mutilated or in any way deformed or to be an unsightly or disgusting object” to appear in public places. These ‘ugly laws’ were as real as the American Civil War, and actually came into vogue just as the war was knocking on the nation’s door. And they were no joke either; The laws weren’t just about morning puffiness or acne breakouts. They came up with rigid definitions of ugliness that cut across social classes and economic conditions.

In 19th-century America, it was no secret that class and appearance went hand in hand. Sometime in 1867, one of the first statutes of the Ugly Law was passed in San Francisco “to prevent certain persons from appearing in streets and public places, and to prevent certain persons from appearing in streets and public places.” ” In times of war and terror, officials believed that terrifying-looking urchins would become just one more thing to fear. Through this law the streets were cleared so that “a woman in delicate health” could roam free of fear from the perverted demons hanging over the nooks. Words like ‘disgusting’, ‘horrendous’, ‘mutilation’ and others found their way into most state ordinances, but each statute had its own version that prohibited acts of begging and roaming around for such ugly looking panhandlers . Such tense versions of ugly laws were welcomed by the public. an article in Chicago Tribune Told public benefit to remove unscrupulous beggars from the streets. But on the other hand, the public loved the eccentric performers who entertained them in the circus. As industrial accidents increased, a person without a finger came to be seen as an experienced worker who could be a victim of occupational hazard. How will the public react to discriminatory laws against the perverted and perverted in such a complex social environment?

In 1881, James Peavey passed an ordinance through the Chicago City Council as an anti-begging law against those who projected their “weaknesses” to encourage the donation of alms. Anyone who matched the criteria was fined $1 to $50, and sent to the Cook County Poorhouse. But he also mandated exemptions for disabled soldiers in honor of war veterans. Over time, Peavey’s memorandum was widely debated and revised to include careful definitions of ugliness and prohibition, which was then enacted as one of the most dehumanizingly ugly laws. This included restrictions on jobs for different groups of physically challenged persons as well as social discrimination. But by then it was common understanding that the law was not a blanket law against perverted people, but only against those who could not support themselves financially. This comprehensive cleaning of the economically backward disabled persons became the strongest voice of these ordinances. The origins of the Ugly Law in Chicago are questionable, but many have since attributed it to Peavey’s outcry against the poor.

The gap between the rich and the poor, the accepted and the unacceptable, thus began to deepen. While soldiers and contemporary artists had a place in society, the unemployed were being pushed to its fringes. In those days, the city board refused to recognize the distinction between beggars because they were too lazy to work and those who begged because they did not get work. The general understanding was that nine out of ten perverted beggars were thieves and liars who used their looks to make money. By that definition, soon the tramps were drawn into the same conversations with disabled non-workers. In response, the city council decided to close all doors to anyone who matched the description; They were banned from holding certain jobs and barred from entering certain places. The belief was that if you could do the job, you deserved it. Otherwise you were ugly. Industrial workers were also exempted from the law as long as they could find work and support themselves. However, the belief was not prevalent at the time that an employee could not retain a job without rehabilitation for his illness. As a result, no concrete support was given to such people and they were left to take care of themselves. How long can a blind woman continue as a seamstress? Thus the lines between anti-beggar laws and ugly laws were allowed to blur.

The general public began to pay attention to the railway workers who had lost a limb at the site and the Relief and Aid Society appeared to be providing aid to those who could get back on their feet with temporary assistance. The underlying belief remained that if you can support yourself, you are worthy. Otherwise you were ugly. Thus the laws are applied more on economic grounds than they are visible to the public.

It was only by the end of World War I that sensitivities had begun. As soldiers became deaf and blind or a limb was missing, the mindset shifted toward acceptance of the disabled. It was a long time coming, as for years even Civil War veterans fought hard to get disability pensions. The term ‘ugly law’ was granted in 1975 to cruel ordinances both for the subject of their case and the magnitude of their impact. By 1974 this law had already been repealed. More access was gradually offered to persons with disabilities, and in 1990, the More Awakened Americans with Disabilities Act was passed in the United States.

, The diseased, the crippled, the mutilated: the classification of disability and an ugly law in late nineteenth-century Chicago