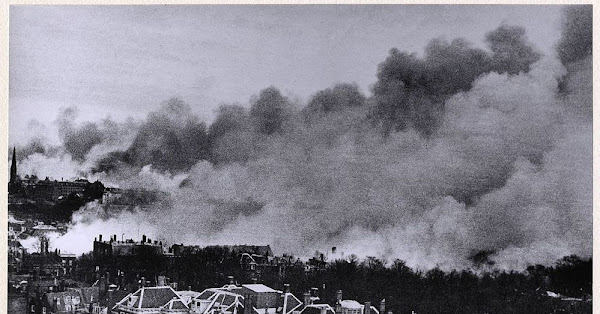 At eight o’clock in the morning of 3 March 1945, the sirens of the first air raid were heard over the Hague. After a while a wave of bombers appeared on the horizon, moving directly towards the city. But instead of bombing the city centre, the formation turned east and dropped its bombs on the Bezuidenhout neighborhood. Wave after wave of bombers dropped their load on the peaceful city.

“They have lost count. The earth trembles. Buildings and entire blocks collapse like a pack of cards. Still others are starting to burn and are burning soon,” reported Wire next day.

The bombing of the Bezuidenhout area on Saturday, March 3, 1945. Viewed from the tower of the Church of St. James the Greater in Park Street. Photo: wikimedia commons

A strong westerly wind picked up the fire caused by the bombing and spread it throughout the neighborhood. The fire department was not adequately equipped to douse the fire, and there was often no water to extinguish the fire. Help had to be sought from South Holland and even Vermorvere and Zaandam.

More than three thousand buildings were destroyed, five hundred were killed and twenty thousand people were left homeless. The sad thing about the devastation at Bezuidenhout was that the perpetrators were not the Germans but the Allies.

Earlier that morning, British Royal Air Force bombers were instructed to bomb V2 installations at Hagse Böss, a large forested area inside The Hague, which the Germans were using as a launch site for their V2 rockets. The V2s were unstoppable. Traveling at supersonic speed and silently like a hawk, he wreaked havoc from above, striking the heart of Britain without warning. Britain had installed several early warning systems along its coastline but these could only detect slow-moving bombers and fighters. No effective defense existed against the feared V2s. 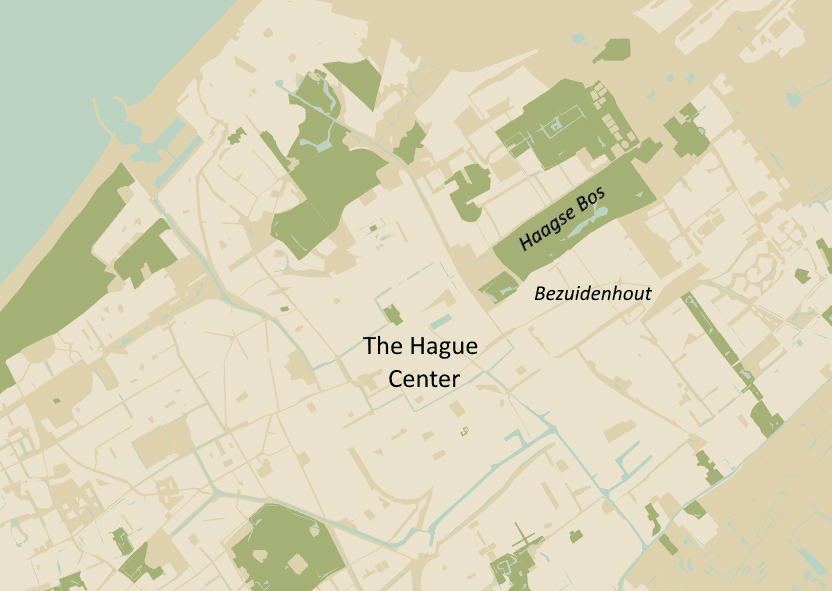 Haagse Bos was one of Germany’s primary launch sites, with more than a third of all V2 attacks from within this forest. The bombing of Hagase Bose was the only way these rocket attacks could have been stopped. However, it was difficult to pinpoint the exact location of the V2 installations inside the dense forest, as the launch units were mobile, and it took only half an hour to launch the V2, rearm and then drive to a different launch site.

The British raiders got some approximate coordinates based on the information gathered by the British. But human error resulted in a coordinate plot at the center of Bezuidenhout, less than a kilometer south of the actual target. To make matters worse, thick fog covered Bezuidenhout and the attackers could not see anything. Under normal circumstances the pilots would have detected and verified the target, but there was no question of visual acuity due to the fog. The bombers relied on the supplied coordinates and dropped 67 tons of high-explosive bombs on the Bezuidenhout area, causing widespread destruction. 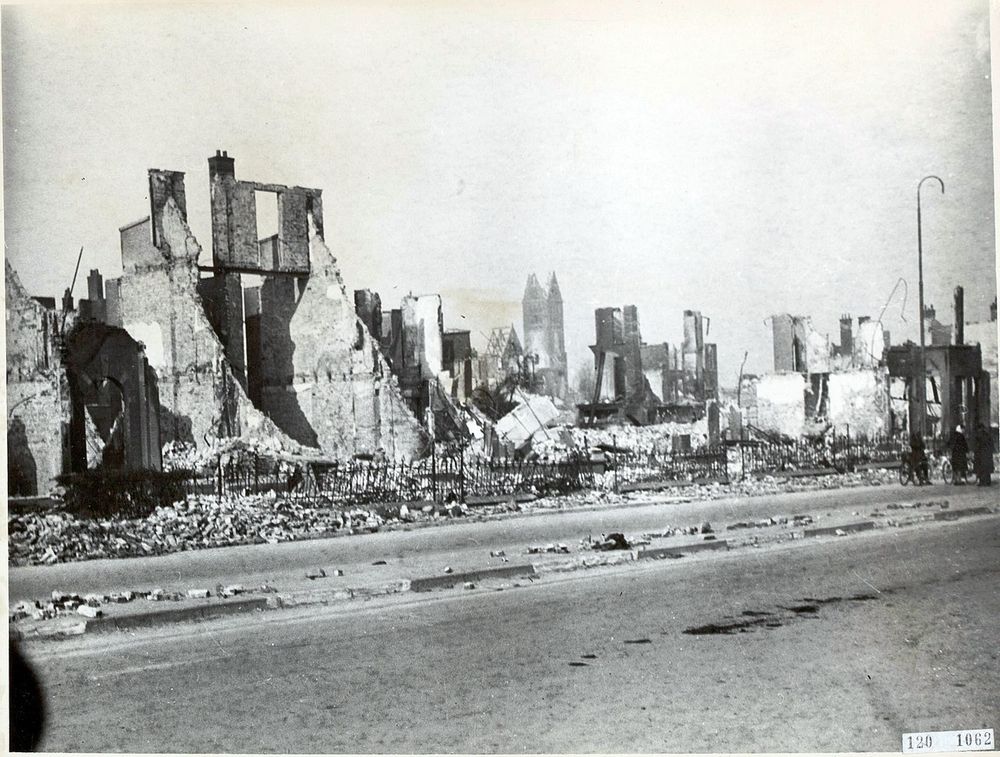 Bezuidenhout, a neighborhood in the city of The Hague, after an accidental bombardment by Allied forces. Photo: wikimedia commons

By the time the pilots realized their mistakes, it was too late. Later, the Royal Air Force dropped the passengers at Bezuidenhout, apologizing for the mistake. troy, The Dutch Resistance newspaper at the time wrote the following about the bombings:

The horrors of war are increasing. We have seen a fire in The Hague after the horrific bombings caused by V2-launching sites. We have seen a column of smoke blowing to the south and the trial of war has descended upon us in its wide influence. We heard screaming bombs falling on Bezuidenhout, and missiles that brought death and misery fell only a hundred meters from us. At the same time we watched the V2 launch and roar, blazing, to see if the launch was successful, if not falling back on innocent people’s homes. It is terrifying to see demons lighting up the sky between houses in the middle of the night. One can imagine the horror that has descended upon us now that The Hague is a frontline city that has been bombed continuously for more than ten days. Buildings, burning and smoldering, a city suffocating with smoke, women and children fleeing, men carrying furniture they tried to save from the chaos. What a calamity, what a calamity.

The saddest part is that this was not the first time the Dutch had clashed with their own allies. On 22 February 1944, Allied bombers were on their way to Gotha to turn a German aircraft factory into ashes. The weather turned unexpectedly bad, and passengers were directed to the Dutch city of Nijmegen to bomb a railway station. Unfortunately, most travelers were not sure whether Nijmegen was a Dutch or German city. They also knew little about whether German-occupied cities could be bombed, and if so, in what way. In the absence of satellite navigation, pilots had to rely on ground clues to identify their location, which many fliers failed to do. When they landed their bombs, many of them believed they were over the German city of Cleves. While the actual target, the train station, was somehow successfully hit, a large number of bombs fell on the city center in residential areas, destroying homes, churches and other civilian targets and killing eight hundred civilians. In terms of the number of victims, it was one of the largest bombings of a Dutch city during World War II. 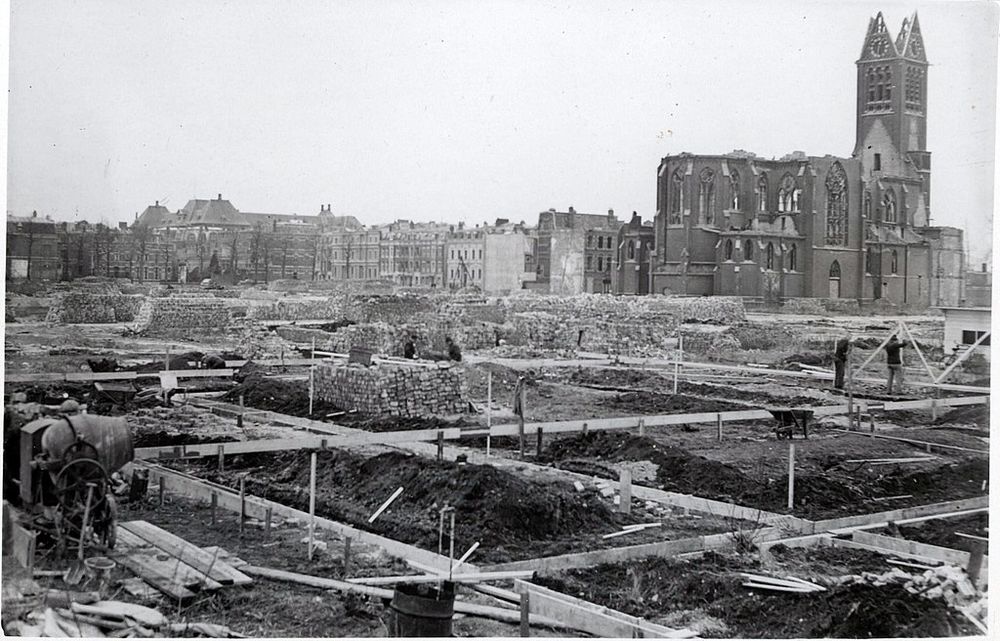 Bezuidenhout, a neighborhood in the city of The Hague, after an accidental bombardment by Allied forces. Photo: wikimedia commons

The Nazis tried to make fun of the Allied defeat by hanging posters in public places that said: “With friends like these, who needs enemies?”.

But the promotion didn’t work. Seven months later, when American ground troops moved across the Dutch border, they were welcomed by residents.

The bombing of Bezuidenhout is celebrated every year on the first Sunday after March 3. 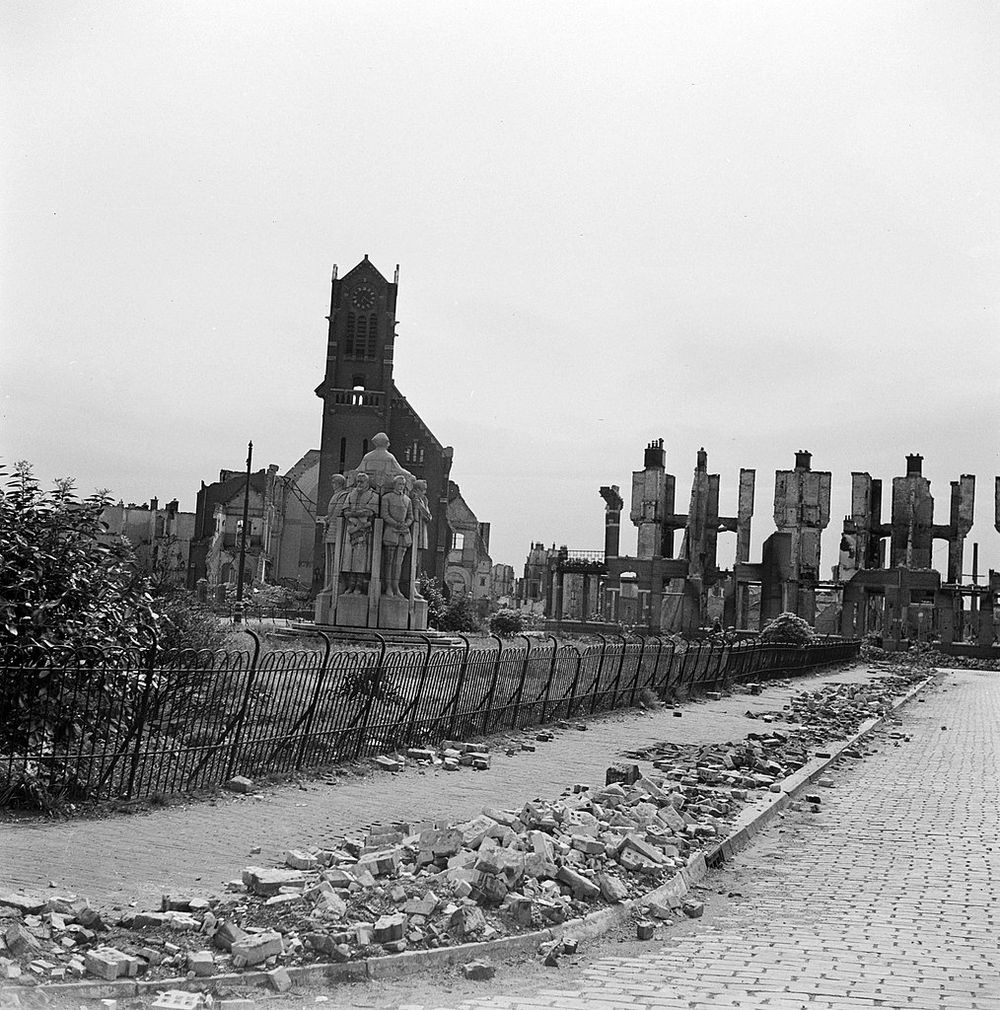