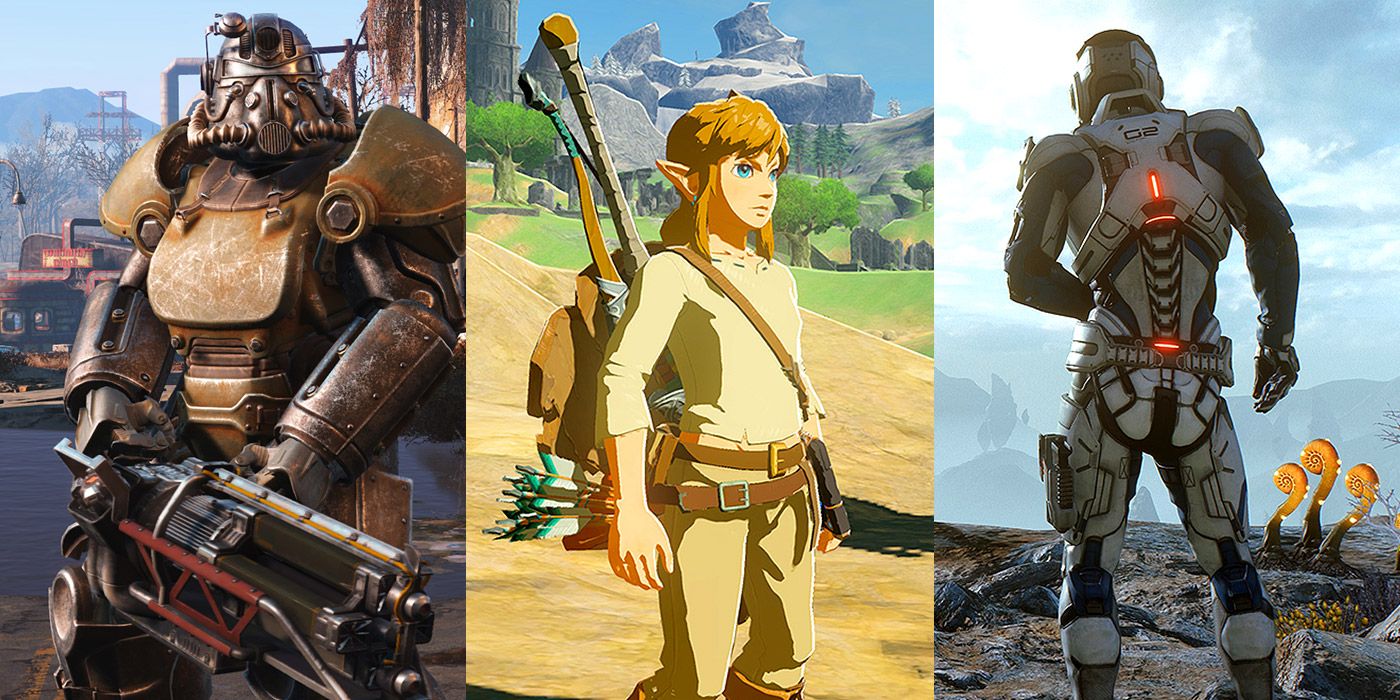 There are more than a dozen massive multiplayer online roleplaying games on the market right now, but only a handful of them really stand out when it comes to storytelling and gameplay. Single-player games are a viable alternative, especially for those who don’t appreciate the foundational mechanics of MMOs.

However, certain games have tried to spice up the single-player formula by incorporating certain MMO elements such as fetch and side quests for added longevity. Others simply follow the same story-based premise as an MMO without adopting elements from that particular genre.

Updated on August 23rd, 2021 by Derek Draven: MMORPGs can suck players in and gobble up all their time, sometimes with disastrous effects. However, when played in moderation, they can be enthralling, and help players to make friends and lose themselves in an adventure much larger than themselves. But it’s wise to take a break from the large-scale ground once in a while, and focus on single-player RPG adventure titles that offer the same spirit, with a more focused approach. Some of these are sci-fi titles while others are straight-up fantasy, but they’re all designed to vary up the formula so the MMORPG genre doesn’t become stale. A few more titles are worth consideration for anyone who needs a change.

The Borderlands franchise nabs elements of Diablo and similar RPG games and blends it with the best first-person shooter mechanics of the genre. The result is a wide, expansive game that focuses heavily on exploration and the pursuit of loot. Technically, the game forces the player to grind, but it’s not as noticeable as an MMORPG.

Borderlands 2 is one of the most accessible titles in the franchise, attracting FPS players for its sheer number of available guns, all of which offer a unique combination of elements depending on the player’s preferred style. There is an element of “trash loot” in the game, which is par for the course, but the story-based RPG elements make up for the tedium of trying to locate the next big treasure.

Each Dragon Age game is more different and unique than the last, but Dragon Age: Inquisition is even more so. It is essentially a single-player MMORPG at its core, with everything from timed quests to resource gathering added into the game’s mechanics.

There’s also enough of an open world to satisfy MMO fans who like to explore a large space yet don’t wish to feel confined by a single-player title. Character customization is also one of the best strengths of the game, and even the class and sub-class system is reminiscent of certain MMORPGs. Plus, it continues the tradition of Dragon Age’s excellent romance options, which are some of the best story elements of the franchise.

This sleeper hit managed to take audiences by storm when it first debuted, and although it’s a short playthrough, that might be a good sell for MMORPG fans who need a break. The Outer Worlds has a combined set of maps that aren’t very large, but they are packed with details and important items, which is a tradeoff.

The same kind of Fallout-style decision making and RPG elements are here, and the story is well done, but the FPS combat is the true highlight. All of these elements mix together to make The Outer Worlds a bite-size alternative to the huge investment of an MMO.

Assassin’s Creed: Odyssey has tried experimenting and veering away from its core formula, which is a benefit given how dated the original games have become. The result is a full-blown RPG that barely resembles what the first Assassin’s Creed game had in mind.

It’s a formula departure done right, with an ocean’s worth of content including side quests, hidden locations and loot that ought to keep players busy for more than 50 hours. Assassin’s Creed: Odyssey is also loaded with a number of extremely challenging boss battles, which is sure to satisfy Dark Souls and MMO fans alike.

Greedfall has one of the most unique locales and settings as far as single-player RPGs go, taking place in a fictional 17th century-style game world. It re-skins the classic roleplaying formula with a colonial-era twist where gunpowder is starting to become just as favored as steel.

This unique take is one of the game’s best selling points. Greedfall‘s character creation system and class customization are also robust enough to keep MMORPG veterans invested. Couple those with the impactful dialogue options and replay value, and Greedfall might as well be an MMORPG unto itself.

Mass Effect: Andromeda is highly controversial, mostly for its less-than-stellar launch and a story that couldn’t quite keep up to par with the original trilogy it was based on. As such, it’s something of a black sheep in the franchise, but it has gained a little more respect in recent years.

RELATED: 10 Shortest RPGs That Fans Can Breeze Through In A Single Day

Andromeda juices up the traditional Mass Effect formula with a vastly improved combat system that focuses heavily on tactics as opposed to straight-shooting. The only downside to the game is the lack of any DLC, following the subpar launch. Essentially, Andromeda‘s story ended prematurely and without a decent wrap-up.

Released in 2002, Neverwinter Nights is an older RPG that came out just as MMORPG titles were starting to pick up steam in the mainstream gaming community. It scored high with critics and gamers for its Dungeons & Dragons-style approach to story and content, as well as a solid set of RPG gameplay mechanics.

An enhanced edition of the game was released in 2019, beefing up the game’s visuals and elements for new and existing audiences. Though the gameplay hasn’t changed too drastically, some may actually prefer the older style for factors such as combat, exploration, and loot.

The Final Fantasy franchise is no stranger to adopting some MMORPG mechanics and features for its games. Ironically, many of its RPG elements helped progress MMO games into what they are today. Skill trees, combat moves, and enemy types are all commonplace elements of the genre, which is why it’s good to take the single-player games for a spin.

Among all the Final Fantasy games, Final Fantasy XII would be the closest to an MMORPG. It has a loot system that works similarly to how MMO games, and the combat resembles traditional MMORPG slugfests, with its own anime-tinted flavor.

At first glance, one could mistake Kingdoms of Amalur: Reckoning for one of those a dime-a-dozen World of Warcraft clones. It definitely utilizes a similar art style, but it’s a much different kind of single-player adventure RPG in almost every way.

Kingdoms of Amalur is a standard high fantasy fare with elves, dark elves, gnomes, dwarves, humans, and magic. The action combat is a major highlight, far exceeding the kind of rigid and standardized button-press approach of most MMORPG titles.

Both Fallout 4 and Skyrim adopt the same adventure RPG elements that have directly influenced big-name MMORPG titles like The Elder Scrolls Online. Therefore, it’s easy to transition between genres. This single-player RPG continues the Fallout story with a ton of quirky humor and a very approachable premise, plus several game mechanics that keep it fresh.

There’s a large map to explore, though it’s not nearly as large as what big MMOs offer. Nevertheless, there’s a lot to see and do, including a few DLC expansion packs, plus a wealth of mod content to extend the life of the game. The emphasis on real-time combat is less MMO than other titles, but the RPG elements are still there.

Dragon’s Dogma: Dark Arisen is certainly a dark horse Japanese RPG that all fantasy fans should check out. MMORPG fans will also find plenty to like in this game, as its vast world and hardcore grinding elements are both challenging, and cathartic.

Right from the start of the game, the stakes are already raised with a powerful and impactful story that has ramifications for the player. The sprawling map and varied enemy types make for some inventive combat and exploration, which is definitely great for MMO fans who want the same, yet slightly scaled back.

Monster Hunter World is not strictly single-player, but it can be played that way if one so chooses. It’s a game that pits the players against nature’s most bizarre creations, many of which require split-second reflexes and pattern recognition to overcome.

The core formula is simple: players hunt down a series of dangerous monsters and engage in brutal, drawn-out fights. It sounds basic, but as the game progresses, it starts to incorporate traditional MMORPG grind elements, which isn’t a bad thing for fans of the genre who love that mechanic.

The Elder Scrolls series started out as a hardcore RPG series with traditional tabletop elements, but it quickly evolved (some might say devolved) into more of a mainstream action-adventure game. Whatever the case, fans of MMORPGs would do well to pick up Skyrim, the fifth game in the official series.

Skyrim is easily the most accessible of the single player titles, and with monstrous support from the Elder Scrolls modding community, there’s no shortage of add-on content to enhance the vanilla game for the modern age. Elder Scrolls Online fans probably play that MMORPG because of Skyrim, making it easy to swap back and forth between both games.

Nintendo’s Legend of Zelda series helped pioneer the modern RPG video game formula, especially with its real-time combat mechanics. Some of these elements would translate over to the MMORPG formula, while the Zelda series itself took on a similar evolution.

Breath of the Wild is renowned by critics and fans as one of the best in the series, with a huge map full of explorable locations, secrets, and things to discover. The lush hand-drawn art style is reminiscent of games like World of Warcraft and Tera, making it easier for MMO fans to break away with this title for a while.

With a sprawling map that rivals even Skyrim, it’s easy to get drawn into the world of The Witcher III. While it’s not necessary to play the original two games before playing the third, it’s nevertheless advisable. There’s a lot to see and do, including some of the best storytelling of a modern fantasy RPG.

There’s a bit of grinding, a ton of MMO-style exploration, and of course, surprises around every corner. With a story that is more centralized and focused, however, The Witcher III feels more snappy and robust than an MMORPG. The only downside is combat, which is a bit dull, but The Witcher III is loaded with a bevy of excellent missions.

NEXT: 10 Best RPGs To Play While You’re Waiting For Dragon Age 4


Next
Bloodborne: 10 Items You Shouldn’t Miss

Sid Natividad likes movies so much as to choose the risk of urinary tract infection than miss a few minutes of post-credit Easter eggs, that shows the extent of his dedication. He is well-versed in multiple fandoms that gravitate toward the edgy and nihilistic spectrum of the internet culture. Outside of being a writer for Screen Rant, he also works as a journalist and has risked his life for mere warzone photos.